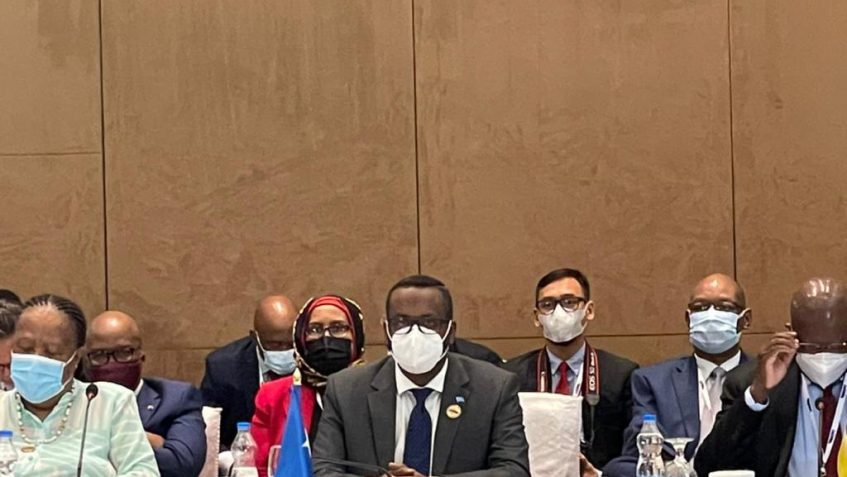 Dhaka, (MfaSomalia) –  The State Minister for Foreign Affairs and International Cooperation, H.E. Mr. Balal Mohamed Cusman, participated, on Wednesday, in the 21st session of the Council of Ministers (COM) of the Indian Ocean Rim Association (IORA) and related meetings that kicked off in Dhaka, where Bangladesh officially assumed its chairmanship for two years.

Addressing the meeting, the State Minister for Foreign Affairs and International Cooperation said that the decision of the International Court of Justice (ICJ) regarding the delimitation of the maritime border and the delineation of the continental shelf and the exclusive economic zone between Somalia and Kenya must be respected.

His Excellency Balal Cusman spoke about illegal, unregulated and reported fishing and dumping waste, and other transnational crime in Somali territorial waters, warning against foreign companies and ships operating with this danger threatening humanity and marine creatures from penetration, declaring that the Federal Government of Somalia is establishing cooperation and a strong strategic partnership with its other IORA member states and allies to train and equip its coastguard to carry out its national responsibility more effectively.

The State Minister for Foreign Affairs and International Cooperation focused his speech a lot on the health and economic effects of the Corona epidemic on Somalia and its response to facing temporal challenges and achieving a relative economic recovery, and said, “The coronavirus (Covid-19) pandemic has dealt a severe blow to the already fragile Somali economy, which led to a deficit in the public budget, and the crisis itself affected on the domestic product of fishing, livestock export and agriculture which means a decrease in local economic productivity .”

On the sidelines of the meeting, the State Minister for Foreign Affairs and International Cooperation held a bilateral meeting with the Minister of Foreign Affairs of the People’s Republic of Bangladesh, H.E. Dr. Abul Kalam Abdul Momen, and they discussed in depth the strengthening of bilateral cooperation in the commercial and economic fields, as well as joint coordination and facilitation of entry and visa procedures for Somali citizens coming to Bangladesh for education, health or business upon arrival at the airport.

The IORA, established in 1997, is an inter-governmental regional organization aimed at strengthening regional cooperation and sustainable development within the Indian Ocean region. It has 23 Member States and 9 Dialogue Partners.