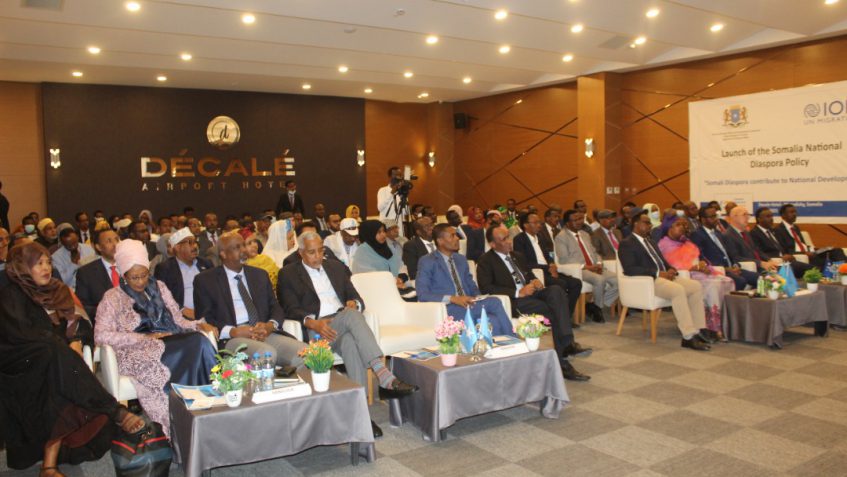 Mogadishu (MfaSomalia) – The State Minister for Foreign Affairs and International Cooperation, H.E. Mr. Balal Mohamed Cusman, launched, on Saturday, the Somali National Diaspora Policy, in a ceremony held in the capital, Mogadishu, in the presence of a large number of ministers, parliamentarians, and the Chief of the International Organization for Migration (IOM) Mission in Somalia, Mr. Richard Danziger.

In his closing remarks at the ceremony, His Excellency Balal Cusman said that the Somali diaspora has an active role in building the state and investing the country, noting that the Somali national diaspora policy responds to several demands, including linking a strong relationship between the government and the diaspora, as well as promoting integration and culture through social activities and constructive dialogues.Several ministers and officials addressed the event, including the Minister of Humanitarian Affairs and Disaster Management, H.E. Ms. Khadija Mohamed Diriye, State Minister for Energy and Water, H.E. Ms. Shukri Mohamud Afrah, State Minister for Internal Security, H.E. Mr. Farhan Ali Ahmed, Permanent Secretary at the Ministry of Foreign Affairs and International Cooperation, H.E. Amb. Mohamed Ali-Nur Haji , and Chairman of the Somali Non-State Actors (SONSA) Mr. Osman Mohyadin Moallim Shatah.

In a speech to the former Director of Diaspora Affairs at the Ministry of Foreign Affairs and International Cooperation, Mr. Mohamed Abdi Ali, welcomed his new successor, Mr. Mohamed Ibrahim Awale, and handed over the administration to him, stating that he had worked hard to accomplish a lot during the past two years, noting that the Somali diaspora had active hands in moving the Somali economy through Supporting their families with monthly financial expenses, establishing shops or indirect financing, or investing in multiple sectors.