Mogadishu (MFA Somalia) – The State Minister for Foreign Affairs and International Cooperation, H.E. Mr. Ali Mohamed Omar, received on Wednesday (14 December) in the capital, Mogadishu, the Ambassador of the Federal Democratic Republic of Ethiopia to the Federal Republic of Somalia, H.E. Mr. Abdulfatah Abdullahi Hassan, on the occasion of the end of his tenure.

HE the State Minister for Foreign Affairs thanked the Ethiopian ambassador for his efforts and valuable role in strengthening bilateral relations between the two friendly neighboring countries, and wished him success in his future work. Acting Foreign Minister: The sacrifices of the Somali security forces and ATMIS will not be forgotten 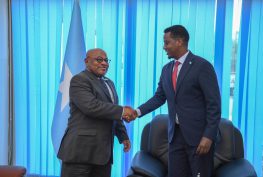