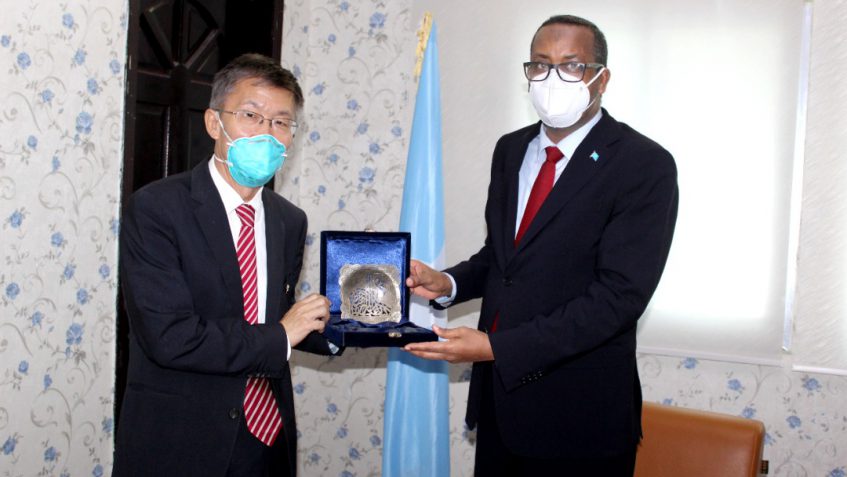 Mogadishu (MfaSomalia) – The Ministry of Foreign Affairs and International Cooperation held, on Saturday, at its headquarters in the capital Mogadishu, a farewell ceremony for H.E. Mr. Qin Jian, Ambassador of the People’s Republic of China to the Federal Republic of Somalia, on the occasion of the end of his term.

During the ceremony, His Excellency Mr. Balal Mohamed Cusman, State Minister for Foreign Affairs and International Cooperation, praised the outstanding efforts made by His Excellency the Ambassador of the People’s Republic of China to the Federal Republic of Somalia during his tenure in Somalia, which contributed to the development of cooperation relations between the two countries and upgrading them to broader horizons in a way that meets the common interests of both countries and the two friendly peoples.

For his part, H.E. Mr. Qin Jian expressed his deep thanks and appreciation to the State Minister for Foreign Affairs and International Cooperation and to all officials in the Federal Republic of Somalia for the support and cooperation he received that contributed to the success of his work, wishing Somalia continued progress and prosperity.

At the end of the ceremony, the State Minister for Foreign Affairs and International Cooperation presented to His Excellency the outgoing Chinese ambassador in Somalia a souvenir on this occasion, wishing him all success in his future work.