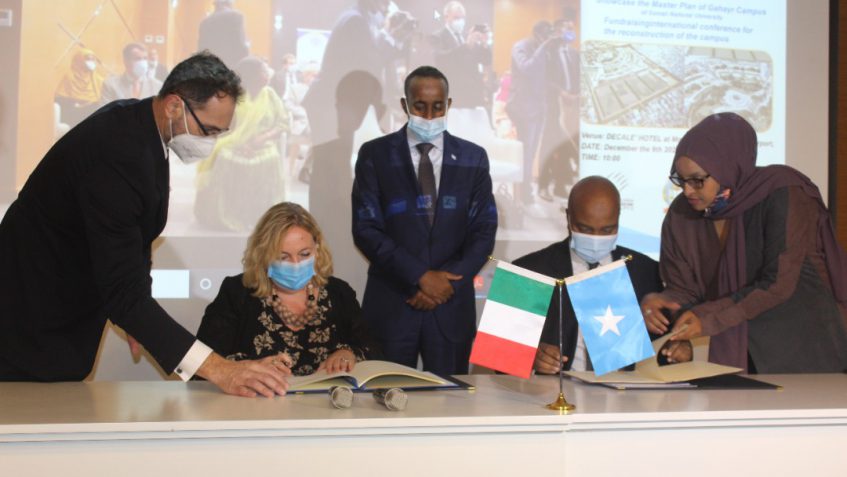 Mogadishu (MfaSomalia) – Somalia and Italy signed on Wednesday in the capital Mogadishu a memorandum of understanding on cooperation in areas that serve the interests of the two friendly countries and peoples.

The Minister of Humanitarian Affairs and Disaster Management, HE Ms. Khadija Mohamed Diriye, signed a memorandum to receive Italian humanitarian aid that will be delivered to the Puntland State of Somalia, especially the coastal areas affected by the tropical cyclone Gati on November 23.

Italian Vice Foreign Minister Ms. Emanuela Del Re, who arrived in Mogadishu this morning, was welcomed by her Somali counterpart, HE Mr. Mohamud Abdullahi Siraji, who discussed with her cooperation in the fields of higher education, capacity building and exchange of experiences.

The visiting Italian delegation in the country participated in a ceremony that launched the fundraising project to rebuild the Gaheyr campus of the Somali National University, located in the Dharkeynley district in Benadir region, in which the master plan of the university campus was presented, whose reconstruction amounted to $ 190 million, while the initiative of one student with one tree will turning the area greener, and the campus will accommodate 20,000 students as planned.

Italy is a major partner of the Somali National University, which annually awards postgraduate scholarships to its graduates.