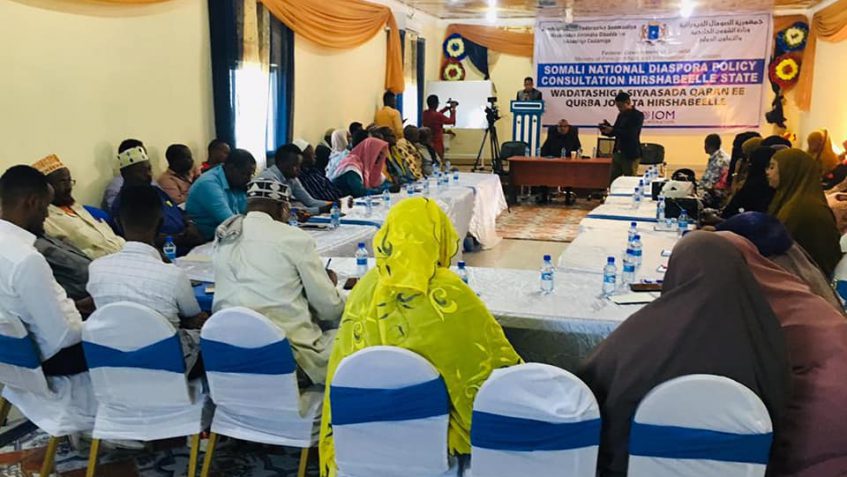 Jowhar (MfaSomalia) – In cooperation with the International Organization for Migration (IOM), the Diaspora Department of the Ministry of Foreign Affairs and International Cooperation held on Monday in Jowhar, the capital of the HirShabelle State of Somalia, a consultative meeting in which 65 persons represented from all segments of society participated to finalize the national policy for the Somali diaspora.

Abdi Ali Muse, Advisor at the Office of the State Minister for Foreign Affairs and International Cooperation, said in the meeting that his advisory and technical team in the Diaspora Department did this work to collect visions and ideas from all Somali regions, as they traveled to all the federal member states, including Puntland State, and expressed sincere thanks and gratitude for the warm reception that his team found from the President of HirShabelle State, H.E. Mr. Ali Gudlawe Hussein, and the senior administrators and advisors at the State House in Jowhar.

Layla Abdala Abubakar, the senior advisor in charge of setting the national policy for the Somali diaspora, said that she is planning to hold the consultative meeting in the capital, Mogadishu, to gather expressions and ideas from the residents of Banadir region, including the returning diaspora.

In a speech by Mohamed Abdi Moallim, the acting governor of Middle Shabelle region at the meeting, he said that he welcomes investment and development projects in HirShabelle State, which enjoys natural and fish resources and fertile agricultural lands.

Abdirizak Bood, Senior Adviser to the President of HirShabelle State, called on the Somali diaspora to return to the country to invest, expressing the urgent need for their diverse expertise and professionalism to reach steady progress.

Chief of Staff of the HirShabelle State House, Abdulkadir Abdulle Hoshow, said that the population of HirShabelle is estimated at five million, calling on the Somali diaspora to make multiple investments in the state, especially in the areas of fruit drinks, tomato canning, energy and the utilization of cattle hides for beneficial commercial purposes.

The Ministry of Foreign Affairs and International Cooperation is preparing to incorporate the combined visions of all federal member states into the national diaspora policy before submitting them to the Cabinet for approval.