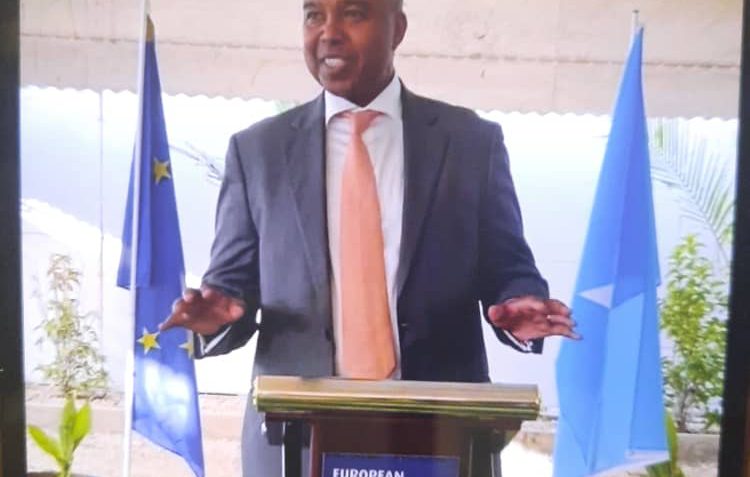 Mogadishu (MfaSomalia) –   The Minister of Foreign Affairs and International Cooperation, H.E. Mr. Mohamed Abdirizak Mohamud, bade farewell on Sunday in Mogadishu, the Ambassador of the European Union delegation to the Federal Republic of Somalia, Mr. Nicolás Berlanga Martinez, on the occasion of the end of his term.

Mr. Nicolás Berlanga has served as the EU Ambassador to Somalia for three years since handing over his credentials on June 3, 2019.

The Foreign Minister praised Ambassador Nicolás Berlanga’s achievements, saying, “Your tenure was marked by efforts to promote the shared goals and values ​​of Somalia and the European Union. This was achieved through a strong program of political, economic and development cooperation in Somalia.”

Minister Mohamed Abdirizak added, “On behalf of the government and people of Somalia, I am pleased to express our deep appreciation and gratitude for your contributions which have significiantly enhanced our mutual ties not to mention promoted regional sucurity. I’m delighted that you leave Somalia during a period of diplomatic normalization with our neighbor Kenya, something that you have advocated for diligently.”

Diplomatic relations between Somalia and Kenya have now been fully restored, with the two countries agreeing to strengthen bilateral relations and resume the work of the Joint Cooperation Committee.