The Permanent Secretary of the Ministry of Foreign Affairs and International Cooperation, H.E. Amb. Mohamed Ali-Nur Haji, welcomed the new Foreign Minister, State Minister and Deputy Minister, stressing that the Ministry has succeeded in some of the main priorities in its foreign policy and is currently planning to intensify its international and regional diplomatic moves to achieve higher national goals with the development of a new Somali strategy in accordance with the vision of the President.

Former Acting Foreign Minister Balal Mohamed Cusman said that he is confident that the new foreign minister has an insight into facing the challenge and leading a successful course of Somali foreign policy, speaking of the tangible successes achieved in recent years.

In his speech at the ceremony, the new Minister of Foreign Affairs and International Cooperation, H.E. Mr. Abshir Omar Huruse, thanked the appointment and the confidence bestowed in him by His Excellency President Hassan Sheikh Mohamud and His Excellency Prime Minister Hamza Abdi Barre, saying that he will work hard for Somalia, its advancement and prosperity, and its presence in international forums, and will also be keen to build projects and implement meaningful institutional strategies.

His Excellency Prime Minister Hamza Abdi Barre said in his speech at the ceremony that his government has a long-term vision that seeks to achieve the goals of the national strategy towards the world, following the “A Somalia at peace with itself and the world” approach, where the Ministry of Foreign Affairs and International Cooperation constitutes the link between Somalia and all the peoples of the world. 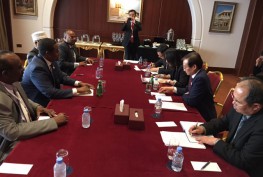 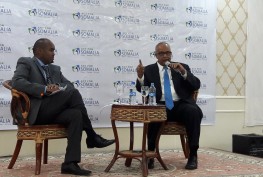 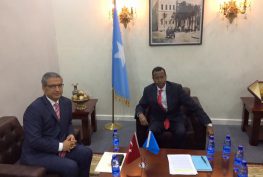