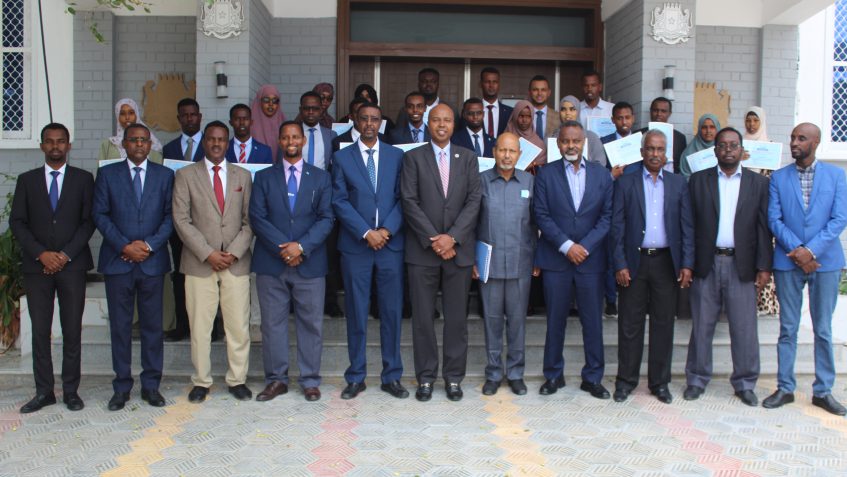 Mogadishu (MfaSomalia) – The Minister of Foreign Affairs and International Cooperation, H.E. Mr. Mohamed Abdirizak Mohamud Abubakar, on Wednesday concluded a diplomatic training course for 19 junior employees in the ministry, which lasted for a period of one month, organized by the Diplomatic Institute.

The Director of the Diplomatic Institute at the Ministry of Foreign Affairs and International Cooperation, Mr. Yusuf Alasow Mohamud, said that the training, which is the fourth of its kind since the institute was re-inaugurated on December 2, 2019, has intensively trained staff with four subjects, including international organizations, Islam and diplomacy, the history of Somali diplomacy, protocol and ethics. As well as two lectures on agriculture and mineral and petroleum resources in Somalia.

The permanent secretary of the ministry, H.E. Amb. Mohamed Ali-Nur Haji, expressed his thanks and appreciation to the volunteer trainers of the institute and their high contributions in developing work to raise professional performance, and also called on employees to transfer what they learned to their colleagues and contribute to making a qualitative leap in the departments of the ministry.

The Minister of Foreign Affairs and International Cooperation, H.E. Mr. Mohamed Abdirizak Mohamud Abubakar, affirmed his great interest in developing the diplomatic institute, announcing that he would participate as a trainer in training courses for Somali diplomats to build their capabilities, considering that the art of writing is one of the finest arts of expression, education and communication, reminding that it is strengthened before dialogue and negotiation.