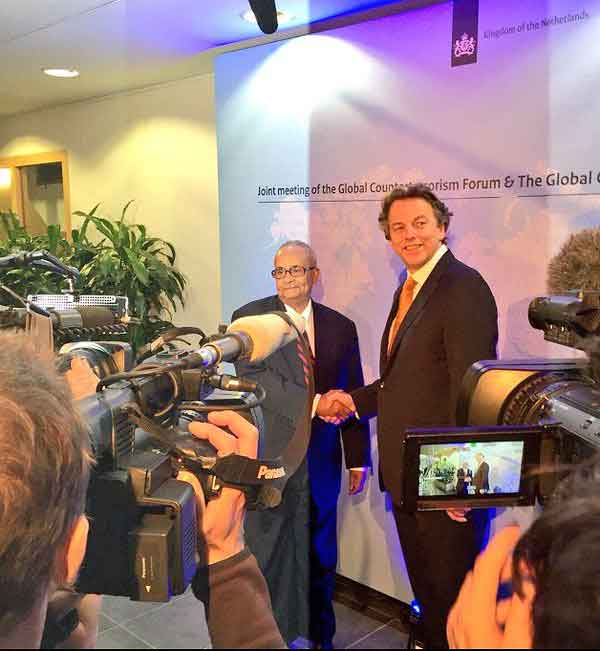 It is a great privilege and honor to have been invited to make an intervention to share Somalia’s experiences, successes and challenges when addressing the painful issue of Foreign Fighters. Like all nations gathered here today at this timely meeting, Somalia is truly concerned about the role Foreign Fighters are playing in destabilizing large parts of the world, including my own country.

From the beginning I would like to pay our deepest respects and pass our Government’s message of solidarity and condolences to all those nations which have suffered from terrorism, the most recent of which was France. Terrorism has no place or justifiable cause which can be defended under any circumstance.

Security is the Somali government’s number one, two and three priority. It is crucial to absolutely everything else. Without security there cannot be the peaceful, progressive and prosperous Somalia our Government and people dream of. Insecurity and violence have hampered our people long enough and today we collectively agree, we cannot turn back nor can we remain still against the actual and potential remaining threat of terrorism.

We as a government understand the importance of, and are committed to, winning the war against AlShabaab and returning full control of all Somali territories to the legitimate state and its people. The Somali National Army in conjunction with AMISOM troops have returned almost 80% of all territory into State hands. The President, myself and other key Ministers have visited these liberated regions and I can tell you, the people are joyful and have high expectations for the preservation of peace and arrival of genuine development to cement their joy.

Somali Soldiers are fighting courageously alongside AMISOM troops to liberate their fellow citizens from AlShabaab’s pointless violence and tyranny. Our police force is conducting door to door and car by car searches on the main roads and residential areas on a daily basis in an effort to protect innocent lives and private property, and restore confidence in the apparatus of our strengthening State on the part of our people and economy.

In terms of delivering Security and Stability in Somalia and the wider affected region, our priorities are clear: we must not rest until terror and terrorism are banished from our lands and entire region. However, terrorist organizations, like all organizations, given time, space and where they can find partnership evolve and innovate. The recruitment of Foreign Fighters is not a new phenomenon as throughout history young men and women have been lured to fight battles far from the comfort and safety of their own homes by different motivations including radicalization, which distorts and exploits all major religions.

Today, the sad pictures and stories of young radicalized Muslims lying to their parents to embark on the long journey to their own death and demoralization is heartbreaking. It is painful to watch for all in this room and it applaud the policy solutions formulated by many members present today to enhance community engagement and cohesion strategies at home.

In Somalia, we are living with the nightmare that Foreign Fighters are causing by joining the terrorist evil that is AlShabaab and our soldiers and those of our neighbors and friends like Kenya, Uganda, Burundi, Djibouti and Ethiopia, are battling them on the ground.

In Somalia, the most recent suicide bombings were carried out by ethnic Somalis with other nationalities including European and African ones. Somalia has an enormous Diaspora living all across the world and, while they are generally a force for good in our national development journey, it is crucial that we classify them as Foreign Fighters where they return to fight within Somalia. The Somali Diaspora is a vital part of our economy and government and a key pillar of our institution building. However, a small number have also joined AlShabaab and continue to do so upon return from their adopted homes abroad. As you can appreciate, the detection of this class of people is extremely difficult especially as our Government is also inviting members of the Diaspora to voluntarily return and invest in Somalia to spearhead development.

The Government of the Federal Republic of Somalia welcomes and wholeheartedly supports UN Security Council Resolution 2178 adopted in 24th December 2014 which highlights the importance of confronting terrorism in all its forms. We agree and have experienced the fact that foreign terrorist fighters increase the intensity, duration and intractability of conflicts. We also understand that this poses a serious threat to their States of origin, the States they transit and the States to which they travel, as well as States neighboring zones of armed conflict in which foreign terrorist fighters are active and that are affected by serious security burdens. We further know that foreign fighters raise morale, bring new ideas and finances, language skills and are targeted specifically to recruit more from within their own communities and to ideologically advance the falsehood of the clash of civilizations.

Foreign Fighters do not have labels on their foreheads identifying them for what they are, and with the complexity and expansion of the internet, it is proving more difficult for all nations, especially developing ones like ours, to detect the recruitment and creation of online communities and terrorist cells which wreak havoc across our land and in neighboring states.

On the issue of detection , intervention against and prevention of incitement, recruitment and facilitation to stem the tide of Foreign Fighters, the Government of Somalia’s security agencies are working closely on the ground with local communities to create the public confidence in these forces to allow for early detection. Our efforts in partnering with local communities thus far have helped to disrupt many planned attacks within Somalia and save countless lives. However, it will take time for the trust and confidence in our government security apparatus to strengthen to the levels where communities truly feel confident enough to partner with them on a long-term basis.

The other serious matter is that Somalia has a vibrant telecommunications and Internet infrastructure but regulating this will take time and will require new skills and financial resources if we are to confront online recruitment. To combat this, our Government is partnering with the telecommunications companies to detect and interrupt terrorist activities at all stages, including the crucial recruitment and indoctrination phases. The message to our citizens and public and private enterprises has been that security is everyone’s business and a collective responsibility and I am glad to report that they have responded positively.

Curtailing Foreign Fighters movements is a substantial contribution to stemming the overall tide of foreign fighters. Passport controls and border security are valuable tools for that purpose. However, in Somalia, we face the challenge of identifying the Foreign Fighter because of the enormous Diaspora we have across the world who are returning for various reasons including, in small numbers, to carry out acts of terrorism. The difficulty is distinguishing between the returnees and this is impossible without the cooperation and partnership of the source countries they are returning from. On another level, it is crucial to understand that the way modern terrorism works has radically altered as a result of technology.

Homegrown operatives can be guided to carry out evil acts without ever meeting their controller who could be instructing them from another region or even continent. Many AlShabaab fighters and operatives interviewed after capture regularly state that they only communicate with their senior leadership only through cell phones and technology platforms. Very rarely do these operatives meet those who instruct them to carry out evil against their own people. We therefore, in order to cut the poisonous snakes head off permanently, urge all member States present today to adopt the widest possible interpretation of “movement” to include digital footprints as well as physical cross-border travel.

Confronting the message of evil and propaganda is fundamental to winning hearts and minds and claiming back our peaceful Islamic religion from those who twist it to carry out unspeakable crimes against humanity. In Somalia, we have adopted Islamic teachings, amnesty for fighters and rehabilitation as the best tools for stemming the tide of terrorism, including foreign fighters. We are grateful to those nations, which generously support rehabilitation camps in Somalia, and we hope more of you can join them.

Our painful national experience of dealing with terrorism head on has taught us many things. We know for certain that terrorism, whatever the supposed underlying reason, is evil and intolerable. It causes misery throughout society and it creates tension between neighboring states that ought to be cooperating to extinguish it. However, the greatest lesson to learn is that to prevent radicalization in the first place, Governments must work towards integrating their communities, offering hope and opportunity to the most vulnerable to radicalization and creating the enabling institutions that would allow their people to contribute to their own security. We must all work hard to win the hearts and minds of our young people who have become prone to radicalization due to social exclusion. Achieving this in Somalia involves providing the people with three indispensable things: dignity, safety and opportunity.

On a regional basis, neighboring states must work with global partners to share intelligence and border management responsibilities in order to stem the tide of foreign fighters potentially reaching and operating within their lands. The idea that it is not our problem will not suffice in this age of transnational terror. Somalia is working with its neighbors and international partners to contribute to global security by sharing information in a timely manner. As a recovering post conflict State with slowly strengthening security structures, we fully understand the value of trust in information sharing. We therefore welcome, and will actively contribute to, the Foreign Terrorist Fighters Knowledge Hub when it is launched.

Terrorism financing is creative, sophisticated and extremely dangerous as it keeps terror networks supplied and allows them to carry out their evil deeds. I am proud to report that the Somali Parliament has only last week passed the Anti-Money Laundering law which was supported by Somali remittance companies and banks. Both of these vital organizations are working with the Somali Central Bank and the Ministry of Finance to improve the transparency of financial transactions and strengthen Public Financial Management in Somalia.

As we get to grips with and prepare to defeat one menace within our borders, we are worried that the ISIS aligned foreign fighters will cross over from Yemen into Somalia. This is a threat for which we are preparing and will certainly require the support of our partners to overcome.

A very famous Somalia proverb is “One finger cannot wash the whole face.” On all the issues of terrorism and, specifically for this meeting, confronting foreign fighters, this could not be truer. Partnership, adequate resources, cooperation and collective action is needed from us all to stem the flow of foreign fighters globally, especially, in frontline States like Somalia.